This is the kit Limited edition spoons

As some will already know the name 2carvedspoons derives from a line in a beautiful song called  ‘two wooden spoons’ by ‘This is the kit’. when first starting out as a full time crafts person a little over four years ago I made two cooking spoons from one birch log just before hearing this song. Then about a year later  feeling my spoons might be of a quality to be able to sell I decided on 2carvedspoons as the business name.

Over the last couple of years I’ve seen them play and gotten to know Kate the lead singer, so when I heard she would be coming to Leeds I thought I’d ask Kate if she would be into selling  small batch of limited edition spoons at the gig. She seemed totally up for it! A special twist was that a friend of mine along with my Girlfriend Emma would be one of the support acts. How exciting!

The finished spoons, along with Kate taking a cheeky Instagram of them. 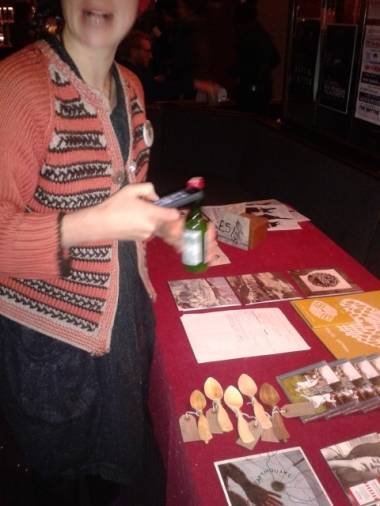 Not normally someone who engraves spoons these were great fun to do and like my spoons the engraving had a function as well as an aesthetic. The final one was sold on the French leg of there tour. They all sold at only £18 each.